Years of research and an untold amount of money has been spent, over the decades, to explain the extinction of the dinosaurs. Was it a volcano?  Meteor?  Extreme climate change? It would have been so helpful if one of those cave-dudes, who once rode a dinosaur to his job at the rock quarry, would have taken the time to record the reason for the end of the reign of those magnificent monsters. He could have, so easily, enlightened us and saved us all these years of expensive, inconclusive research.

My husband and I have a hummingbird feeder on the patio outside of our bedroom. We love to wake up in the morning and watch the hummingbirds buzz around the feeder madly defending what they consider to be their own.  My husband has assumed the responsibility of cleaning and filling  the feeder. One morning, as he was standing on the patio, enjoying the cool quiet of the morning, one of our hummers buzzed the side of his head, then zipped around for just a second, to meet him face to face. My husband was mesmerized. And that’s when he realized that the hummingbird feeder was empty. Was this little feathered creature reminding him he had neglected his responsibility? Who knows… but it appears that was the case as it now happens whenever that feeder is empty.

Several weeks ago as I was having lunch with friends, I shared the hummingbird story. I guess I thought our close encounter with the hummingbird represented a special, unique experience. Not the case. Every single person there had a similar tale to communicate. They shared stories of hummingbirds buzzing kitchen windows,  hovering around people swimming in pools and pestering gardeners pruning bushes. Our experience was anything but unique.

Then it dawned on me! Either natural selection will provide the humans of the future with a brave, in-your-face hummingbird who bangs his long beak into sliding glass doors and windows and pecks human heads as a reminder that its dinner time. Or these beautiful little creatures will totally lose their ability to recognize a real flower and identify real nectar having relied on the store-bought hummingbird feeder, for so long. As I see it, it’s just a matter of time, even if it is a millennium, before the hummingbird is extinct. That means it’s only a matter of time before children dress as hummingbirds for Halloween, can pronounce every species of hummingbird regardless of the number of syllables, and a movie is created about a park inhabited by genetically recreated hummingbirds that fly amuck.

I’d like to do the thoughtful thing for those future generations and save them the agony of all that extensive research. But, my dilemma is in deciding which story to choose to leave as the explanation. I think a hole in the ozone story might be an appropriate explanation. It’s dramatic and has all the pieces necessary for a future full length feature film.  The meteor theory might be plausible again. Who knows how much damage might really have occurred by meteors, by then. Or maybe I should go with the truth and explain they died from a type of amore. They were simply loved to death. It would be a charming legacy and not a bad way to go. 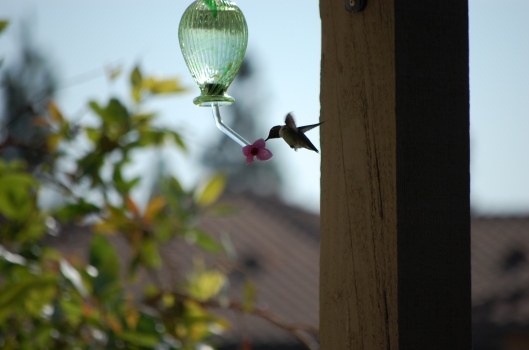 Life is a gift

Click here to visit my Etsy site to shop for creative ways to celebrate life!